Primary Flat = The flat of longest length located in the circumference of the wafer. The primary flat has a specified crystal orientation relative to the wafer surface; major flat.

Secondary Flat = Indicates the crystal orientation and doping of the wafer. The location of this flat varies.

Miller Indices:
All lattice planes and lattice directions are described by mathematical description known as a Miller Index. This allows the specification, investigation, and discussion of specific planes and directions of a crystal. In the cubic lattice system, the direction [hkl] defines a vector direction normal to surface of a particular plane or facet. The Miller Indices h,k,l are defined as follows: 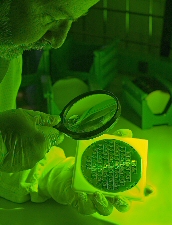 NOVA offers the best competitive pricing without sacrificing quality. No order is too big or too small for us to handle. Contact Us today.